Who benefits from war on terror timeline

How the "war on terror" was invented 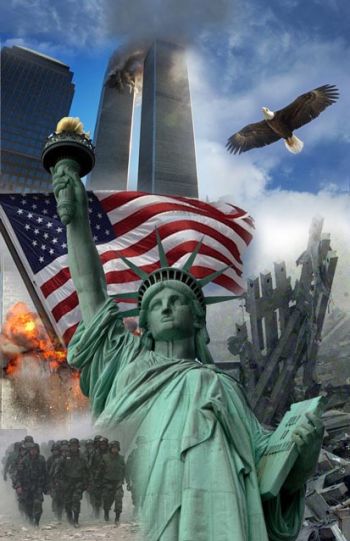 Attack on the World Trade Center and human freedom: when will the truth finally triumph?

Although the terrorist atrocities of September 11, 2001 had a tremendous impact on world history, global society and the lifestyle of all of us, the events surrounding “9/11” (“Nine-Eleven”) are still completely opaque to most. It is strange that this one crime of all things, which has changed the course of things more massively than any other in the last few decades, has not been properly investigated to this day - neither legally nor forensically. For example, the steel girders of the World Trade Center Break it down into small pieces in a hurry and ship it to Asia. After all, they were the central pieces of evidence from a crime scene where 2,700 people were killed! This, in turn, indicates a decision taken at the highest level with the aim of destroying the evidence and making a proper investigation impossible. So much of what we now consider political history is, in truth, nothing more than a bunch of unproven suspicions and allegations.

With lies to war

Anyone who studies 9/11 quickly understands why the administration under President George W. Bush allowed the destruction of evidence and delayed an official investigation of the crime for a whole year. The facts show beyond any doubt that high-ranking government officials and the owners of major media corporations conspired from the outset to mislead the public as to what actually happened on that terrible day. Over and over again, they told the people the same lies with the intention of dragging the United States and its allies into what we call an endless and criminal war global war on terror know.

The 9/11 deception, which began in September 2001 under President Bush, was carried on by Barack Obama until the end of 2016. And the new administration of Donald Trump will continue to pursue the goals of the war on terror, as the new president declared on February 6, 2017 when he said MacDill Air Force Base (the headquarters of the US Central Command) visited: “Radical Islamist terrorists are desperate to carry out attacks on American soil, as they did with 9/11. And like they did from Boston to Orlando to San Bernardino. [...] We will defeat radical Islamist terrorism. "

A few hours after the horrific act and before a criminal investigation could even be launched, the Bush administration declared these terrorist attacks an "act of war". That same evening the decision to go to war was made against Al Qaeda and the Taliban regime in Afghanistan. This hasty haste suggests that such war plans had been forged before 9/11. Because the attacks were interpreted as an “act of war”, the government did not even have to prove that Osama bin Laden was guilty. Therefore, the Federal Police FBI did not conduct a proper investigation, but focused on confiscating and concealing important pieces of evidence. This is how you protected the official version of the story. Had 9/11 been investigated as a crime, prosecutors would have had to prove that Al Qaeda had a motive and also had the means and opportunity to commit this crime. But instead of granting the public a correct investigation and then presenting the relevant evidence, the American people were immediately fed with the prepared and completely unproven declaration that Osama bin Laden planned and carried out this act while he was hiding in a cave in Afghanistan held.

Less than three hours after the first plane crashed into the towers, Ehud Barak stepped in front of the television cameras. Israel's former prime minister and former chief of staff as well as head of the military intelligence service gave the BBC World an interview in their London studio, in which he blamed bin Laden for the terrorist attacks and one of them global war on terror called - this demand should quickly become the generally accepted interpretation of 9/11.

Ehud Barak said: “From today the world will no longer be the same, this is an attack on our entire civilization. […] If it is a Bin Laden organization - or someone else - I believe the time has come to embark on a globally orchestrated effort led by the US, UK, Europe and Russia to extract all sources of the To fight terrorism. It is a fight similar to the one our ancestors once waged against pirates. [...] It is time to wage an operational, concrete war on terror, even if that demands certain efforts and restrictions in everyday life from our society. "

Ehud Barak also joined on the same day Sky Television by Rupert Murdoch, where he again called on the West to go to war on terror. “The most obvious thing I suspect is a bin Laden organization. [...] The governments of the world should be able to take action. […] Bin Laden is in Afghanistan. [...] We know where the terrorist nests are. It's time to act."

Nine days later, President Bush told the American people that Osama bin Laden and nineteen Arab terrorists attacked the United States because "they hate our freedoms". In that September 20, 2001 speech, Bush set out his plan for a global war on terror: “Our war on terror starts with al Qaeda, but it doesn't stop there. It will not end until every terrorist group with global influence is found, stopped and defeated. […] You Americans: Don't expect a single battle, but rather a protracted campaign like we have never seen it before. [...] We will also persecute nations that support terrorism or offer it refuge. Every country around the world now has to make a decision: Either you are on our side or on the side of the terrorists. "

That the Bush administration led the US so quickly into war with Afghanistan with no evidence against bin Laden suggests that the real reason for the 9/11 terrorist attacks was the forced proclamation of a War on terror is. The fact that all evidence from the crime scenes, which refute the official version of bin Laden's guilt, was consistently concealed by the mass media, seems to further corroborate this suspicion. By never including important evidence in their reports, the controlled press has effectively protected the official lies, criminal wars and real terrorists from exposure. This was the only way to lure the public into war with completely unfounded lies.

From the beginning it was obvious that the press was censoring certain aspects of 9/11. The news that appeared only once and was never picked up again included, for example, eyewitnesses speaking of explosions in the World Trade Center or reports that dozens of Israelis had been arrested in connection with the attacks.1 Incidentally, President Bush stopped His promise: More than fifteen years later, the US and its allies are still waging wars that were started under the pretext of counter-terrorism during his tenure. These war campaigns and the “homeland security” measures implemented after 9/11 cost the US well over 2.5 trillion dollars - money that the state had to borrow at high interest rates.

The atrocities of September 11th did not just happen because a handful of Islamists made up their minds to do so. As Larry Johnson, the deputy director of state affairs in charge of counterterrorism, said, “There's nothing in history to compare these attacks with. The only thing that comes close to them would be an intelligence operation by the former Soviets. "

The world has changed from an incredibly well prepared one False flag-Operation fooled, which blamed Muslims on the public with Shock and Awe ("Shock and awe") to shake. In this way fear and anger should be planted in people's hearts so that they would support an endless war agenda.

As mentioned earlier, perhaps the most important indicator that 9/11 and the War on terror are the product of the same conspiracy, the fact that the government and media to this day censor the scientific evidence refuting the official 9/11 account (more on this in the article below). If one examines the historical roots of the 9/11 crime and the war on terror, one can indeed find many other indications of one and the same origin.

The so-called war on terror is basically an Israeli ruse developed in the 1970s to convince the American public that the enemies of Israel are automatically the enemies of the United States. Underlying this lie is the intent to entrap the US military in the Middle East for the long term. It is supposed to wage wars on Israel's enemies and thus protect the Zionist state. The thought leaders of the war on terror knew that such a deception could only succeed if a massive and extremely spectacular terrorist attack shook the United States. So it appears that - apparently in the late 1970s - they began planning the catastrophe that would plague the United States on September 11, 2001.

The following chronicle of some key events gives us an understanding of the true context of a seemingly senseless world crisis, the effects of which we are all feeling.

On four and a half more pages of the magazine you will find a chronological summary of the most important events that led to the global "war on terror" in the full article. Some are well known, but many are not. As never before, this article concentrates the facts into such a clear picture that it falls like scales from our eyes why and to what extent the world has been lied to and forced into a global state of war that otherwise would not have occurred in the first place.

In addition, in a second article we present the biggest lies, cover-ups and irregularities in relation to the attacks on the twin towers in New York and explain the secretive evidence of “Ground Zero”. That many questions remain unanswered during the terrorist trip to a Berlin Christmas market the official version does not make sense in some respects, we also show in an additional article.

A good fifteen years after September 11th, 2001, it is high time the world finally learned the full truth - because this is the only way we can prevent the flimsy “war on terror” from pushing the world into an abyss where there is eternal war and slavery expect us.

You will find these texts, which are extremely important in global politics, in our Facts are Facts print edition no.89.

Because this topic is so extremely important, the ZeitSchrift has already published various articles in connection with the war on terror or the “clash of civilizations”. This includes, among other things, this small selection:

Refugee invasion
How think tanks and the global elite want millions of predominantly Muslim refugees pouring into Europe in order to destabilize the entire continent: Wave of refugees: The planned invasion

Islamic State
You can find a large disclosure report about the backers and the rise of Islamic State and Islamist terror here: Islamic State: The Mask of Evil

Islam: clash of cultures
Was the development that Islam has undergone in the eyes of the West inevitable - or perhaps fueled by those forces that want to conjure up the clash of civilizations - the "clash of cultures"? Islam: How a Religion Became a Threat

9/11 backgrounds
We go into detail on the many open questions at all four crime scenes of September 11th and discuss the real possibility that spy software could have taken control of the passenger planes. We also deal with Italy's ex-president Cossiga, who had publicly blamed the CIA and the Mossad for the attacks: 9/11: The conspiracy behind the conspiracy & 9/11 - A computer crime?

9/11 vertigo
As early as 2007, Christopher Bollyn wrote for the ZeitSchrift about his personal 9/11 story, the suppressed facts and the reaction of the state authorities: 9/11: On the trail of a great fraud

Share this article with your friends and relatives or send us feedback.

Article appeared in Facts are Facts no.89

Order this issue now and read more articles on these topics:

To the table of contents