What does half strength formula mean math

Today is officially my first day in summer! School is over and never high school again. It's a shame ... I had a lot of fun at CC High. US schooling just before the holidays can be pretty scary. 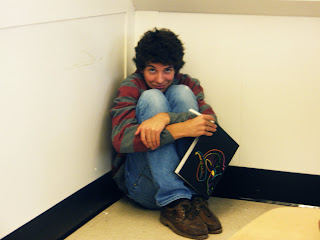 The last English lesson came to an end. I do believe that my English has improved ... at least when I write. It was shocking to hear myself speak in a video (it was about a run-on sentence that threatens the world and the smicolon that frees the world from this danger). My accent is really awful! But writing always works better :) That's why I'm publishing my final essay in English here. Not to show how good or bad my English is, but because I think it sums up my experiences quite well, I put a lot of time into it and find a lot of my thoughts in it:

It was the twenty-first of March, 2009 when I found myself comfortably seated in an Airbus A-360 flight number LH 408 from Frankfurt, Germany to Portland International Airport in Oregon. My hand-baggage was safely stored above my seat and another bag (I could bring a different piece of hand-luggage with me) next to my feet under the seat in front of me. Three hours ago I had hugged my parents at Hannover International Airport and then took the plane to Frankfurt. It was the start of a challenging three month journey loaded with new experiences and change.

I've heard a lot about a foreign exchange before. There are so many stories about friends that returned after a year in England, Canada, or India as totally new people. Some had good experiences. They had a year of fun, found new friends, made connections, lived a new independent lifestyle, were influenced by a totally different culture, improved their language skills and finally had ‘the best time in their lives’. But others, those who can't make friends so easily or have a more quiet nature, sometimes came back as even more introverted persons that now have difficulties returning to their former lives because they lost contact to their old (and often good) friends and then have problems reconnecting with these relationships. Things changed without them. In general you can say: Life before and after this adventure is not the same.

After landing in Frankfurt, I had a first impression of what being alone at a strange place is like. Having recognized that my plane wouldn't start at the gate written on my boarding card (five minutes before boarding there was no flight announced), and finding no annunciation panel in the whole terminal, I was able to identify gateway A58 as my new entrance comparing the flight number on the monitor with the number on my boarding card. Because of technical difficulties nearly three-fourths of the passengers didn’t get a seat and received one directly at the gate from two obviously overstrained stewardesses. As a result my seat was given twice and I was upgraded to business class. Having gained my first experience I was sitting in one of these huge comfortable business class seats that can turn into a bed if you push a button with a feeling of curious excitement and fear of the things that waited for me. All that I could do now was to enjoy the advantages a business class flight brings along and to try not to think too much about what would happen at the end of that twelve hour flight.

Things turned out to be different than I expected, but in a totally positive way: The strangers I lived with in the beginning were no strangers anymore when time went on, the language was no big deal after all, and being an exchange student makes you automatically popular. Since I'm not a bad student in Germany, I could catch up in the High School fast and even achieve good grades. Of course the hype calmed down fast but some of all the faces I tried so hard to remember in the first overwhelming weeks in school became friends and their names became familiar. It's strange how fast you adopt a lifestyle that is so different from the one you are used to. You can use the new environment to try new things or to get rid of old habits. I started to be more concerned about the way I acted and appeared for other people just because you have to build up new relations to other people.

The first time was socializing (You notice for example that people like you when you smile). But one thing you do too easily in such a situation is to act differently than you really are. The best you can do is to be open for other people and to be yourself. Being natural and opening yourself to others let someone else react in the same way. Other people enter your life as well as you touch their lives. You affect each other’s life, build a relation to that person, and when the time is over, you leave the place taking with you as much as you can. A lot of people have influenced me: Members of my host family, their friends, teachers, and other persons I have met. In the best case you have also changed the place where you have been a little and stay in contact. But it is not over jet and still so many things will happen. When I leave this place, I can look back on three months full with unexpected challenges and new relationships. In my opinion it is true to say that an exchange, even if it lasts only three months, is character forming. You are thrown in a totally new environment and have to build up a new life. The journey showed me: Live, your own character, and your surrounding are constantly changing; it is in your hand to push it in the right direction. 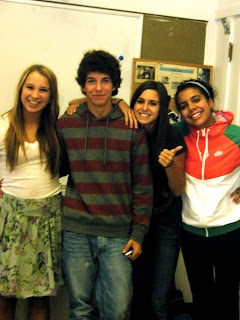