Aylesbury duck how many eggs

The Aylesbury duck is consistently mentioned in the literature as the oldest, consistently bred breed of duck, which has always been represented at shows over the years. The special thing is that this duck has always existed as an "economy type" and as an "exhibition type". Today the Aylesbury duck no longer plays a role in commercial poultry farming and is also endangered worldwide in the exhibition type.

The poultry standard requires the Aylesbury duck to:
A very massive, broad, but not clumsy-looking duck, finely articulated in all parts of the body, with a horizontal posture. A good keel training is very important. Pure white plumage is important. Another striking feature is the long head with a long, pink beak. A weight of 3.5 kg is desired for the drake and 3.0 kg for the duck. Animals with too small a size, too little body depth and poor keel formation are grossly flawed. Animals with yellow plumage and yellow beak are rejected.

So much for theory. In practice, you will hardly find an animal in the desired weight range at shows. The usual weights are between 4.5 and 5.5 kg for adult drakes and between 4.0 and 5.0 kg for females. In the literature at the end of the 19th century the weight of the duck is given as approx. 4 kg and that of the drake as 4.5 to 5 kg.

While no keel formation was and is not desired in the economic type of the Aylesbury duck, poultry breeding has concentrated particularly on this characteristic. Some animals are exhibited that almost touch the ground with their keel.

Since the Aylesbury Duck is primarily a selection breed, it is highly likely that it has genetic characteristics that make it very valuable for crossbreeding.

The Aylesbury duck was bred from the English country duck in England during the 18th century. The breeding focus was in the county of Buckinghamshire, around the town of Aylesbury, which is about 55 km north-west of London. The young fattening ducks were eight weeks old and weighed 5-6 pounds and were sold as so-called "green ducks" in the London markets with great success in the spring.

When fattening duck breeding increased in the USA and Europe in the middle of the 19th century, the first animals also came to Germany, spread very quickly and became the most popular and best-known breed. But the enthusiasm didn't last very long. Already between 1870 and 1880 the Aylesbury duck got increasing competition from the Peking duck. Although still referred to as the finest pochard at the time, it was pushed into second place as an economic breed by the end of the 19th century. This is all the more surprising because the Aylesbury duck was said to have good keeping qualities in addition to its fine meat quality. It was considered extremely weatherproof, fast-growing and precocious, and for a time even a reliable breeder. Overall, the Aylesbury duck had no disadvantages compared to its rival, the Peking duck. On the contrary, the extremely successful Peking duck of American breeding was probably the result of massive cross-breeding of Aylesbury blood.

The farm-type Aylesbury duck provides excellent meat and is very interesting for a sideline because of its high weight, which it quickly reaches. The pure white plumage and the white skin make for a very appetizing carcass that is easy to sell. But this form of the Aylesbury duck is almost certainly no longer available in Germany.

Anyone who is interested in the duck from an economic point of view is dependent on the few pedigree poultry breeders still available for purchase. It is well known that economically relevant performance characteristics are only in second place for these breeders, i.e. they receive animals that correspond perfectly to the "German Poultry Standard", but usually do not meet the expectations of an Archehof operator. Most adult animals are far too fat and all too often drag their keel, one of the most important breed characteristics in the poultry standard, through the dirt. It is therefore advisable to pay attention to animals with less keel formation when buying or to select for them later. (The purebred poultry breeders usually sell such animals at low prices, as they are not suitable for exhibitions).

In order to achieve a decent fertilization rate of the eggs, the breeding line should not be larger than 1.2 and the animals should not be too fat. The ducks need a shallow watering hole for pedaling.

The exhibition type Aylesbury duck is not very suitable for commercial use, but it certainly poses a challenge to committed breeders who are interested in breeding the commercial type again. 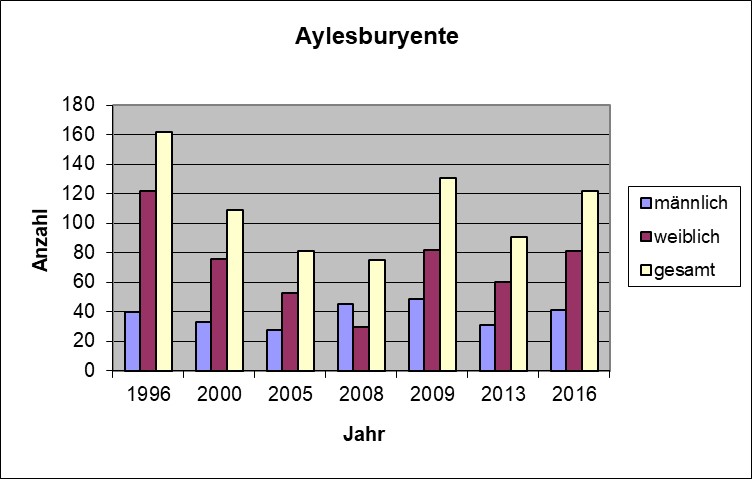 The Aylesbury duck no longer plays a role in commercial poultry farming and is also endangered as an exhibition type. In U.K. there are still one or two companies that breed the duck farm type for upscale gastronomy. In pedigree poultry farming, the duck is on the red lists both in the home country of England and in the USA, where it was at times very widespread.

The Aylesbury duck has been included in the GEH Red List as extremely endangered (Category I); there are currently only eight known breeders left. The duck can hardly be seen at exhibitions.