What does constant non-zero speed mean?

In this article, we will deal with speed from the point of view of physics. We will explain to you how to calculate the speed in physics and provide you with the appropriate formulas. This article belongs to the field of physics or mechanics.

First of all, a distinction must be made between the type of movement present in order to then be able to calculate the speed. This is a typical task in the field of physics. We now start with the uniform movement and then look at the uniformly accelerated movement.

What is uniform motion?

Uniform motion has the following properties:

The formula of uniform motion sets the information Distance, speed, time and starting distance in relation to each other. The following is now the general formula for calculating the speed in physics for uniform movements, as well as the meaning of the symbols. Then we will provide you with some explanations and examples for a better understanding.

In very many cases the starting path does not exist. This simplifies the formula too

Time for a few small examples of uniform movement. One thing is very important: you have to insert the numbers in the form in which they were given in the formula. Speak the distance in meters and not in kilometers or centimeters. Or the time in seconds and not in hours. If you do not pay attention to this, you will get crap out of arithmetic very quickly. 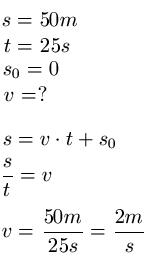 Now let's take care of the uniformly accelerated motion from the point of view of physics. This has the following properties:

So again: the acceleration is always the same. Example: a = 5m / s2. This means that the object is moving at 5m / s2 accelerated. "A" does not change during the movement, otherwise the acceleration would no longer be uniform.

There are three laws of uniformly accelerated motion, which also allow the calculation of speed. These laws also provide information too Distance, acceleration, time, initial speed and initial distance.

If the movement starts from a standstill and from the starting point, the formula simplifies to: s = 0.5 a t2

If the movement begins without a start speed, the formula is simplified to: v = a * t
Formula uniformly accelerated movement (acceleration-time law):

Time to calculate one or the other example of uniformly accelerated movement including speed. 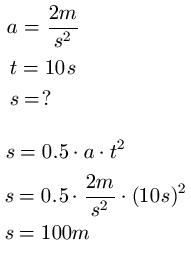 Many students have problems converting units. For this reason, we are going to give you a short summary of the most important conversion rules.

With this information, the calculation of the speed in physics should succeed for common examples. However, we have not discussed the uneven acceleration here.