The Georgetown company, "STI International" makes some very good combat pistols. Their tactical line is made up mainly from long barreled models with single or double stack magazines. Here, we'll focus on two that use Colt M-1911 design and European 9 × 19 Para caliber.

Model Tactical 4.0 has a large, modular, full-length polymer frame and a shorter Commander model slide. The compact Spartan III has a classical steel frame and its main purpose is self-defense.

Tactical 4.0 is a true modern firearm made by “STI International”. It was released for sale two years ago and is equipped with the most significant improvements of the M-1911 system, along with previously mentioned high capacity polymer frame. It can use two magazine sizes in 9 × 19 Para caliber, with 20 or 26 bullets, giving it incredible firepower. 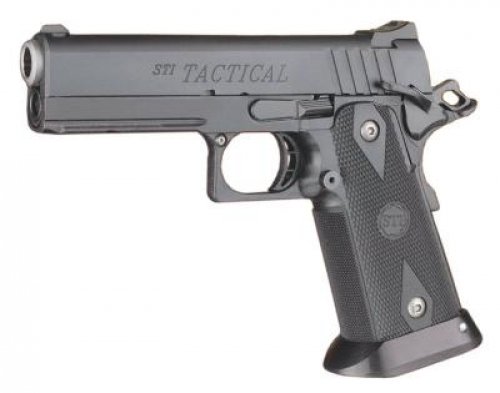 Tactical 4.0 has straight and serious lines, it is completely black, has a shorter slide and an extended frame. It is, however, not overly large; Its barrel is 4.26 "long and its total length is 7.65", the total weight of the pistol (without ammo) is 33.9 oz. It shows its true potential only when you hold it in your hands. It is completely black and flat, short, wide, agile and heavy. This is an incredibly comfortable and well balanced pistol with SA trigger mechanism and all finely crafted manual commands of a typical Colt system model.

At the shooting range, some of its sports characteristics become apparent. It has a competition grade thick (bull) barrel and an excellently fitted slide. Tactical 4.0 is also equipped with a recoil softener (STI Recoil Master), which, when combined with short, clear firing action and excellent wide, combat sights creates tight shot groupings - equal to any STIs sports model.

Subjectively speaking, this is a much more stable and faster weapon than most other models. Every two bullets create from 30 to 40% tighter shot groupings at all distances, than competition in the same class. Replacing a magazine can be done in literally one second. All controls are precise and easy to use, allowing an incredibly fast operation. Due to its larger mass, the recoil does not increase as the magazine empties. Recoil control in rapid fire is excellent and does not seem any different when firing the first or last bullet.

However, reliability is much more important for a combat weapon than accuracy. Tactical 4.0 uses high quality, steel magazines that ensure smooth operation. The barrel itself has a feed ramp with a wide nicely polished channel, so all kinds of ammunition can enter the chamber without resistance. Tactical 4.0 is not picky about round types, which is to be expected from a combat firearm. The slide moves softly and the casing extraction is secure and smooth, so using this weapon to double tap is very satisfying. During my testing, the pistol did not jam even once, even in combat firing mode.

This handgun allows for excellent feeling of control, mainly thanks to its checkered grip and excellent weight distribution which is shifted slightly backward.

Although full steel handgun may not be the perfect choice for concealed carrying, it is still the first choice of many people who prefer the traditional feel. This compact, single stack model has been made just for you. Spartan III has a very fitting name, it is a very much a no frills design with straight lines that functions perfectly. All of its controls are on the left side, it has fixed rear sights and classic wooden wraps on the pistol grip with diamond checkering. It is immediately visible that every part is expertly crafted, finished and fitted. It is made using the smallest officers frame, with a barrel only 3.24 ”long. Its full length is 7.34 ”and it weighs 32.7 oz, only slightly less than the larger Tactical 4.0. The magazine can hold 8 + 1 9 × 19 para bullets. All in all, it is a classic model done in the M-1911 system, although it is made in the latest configuration. 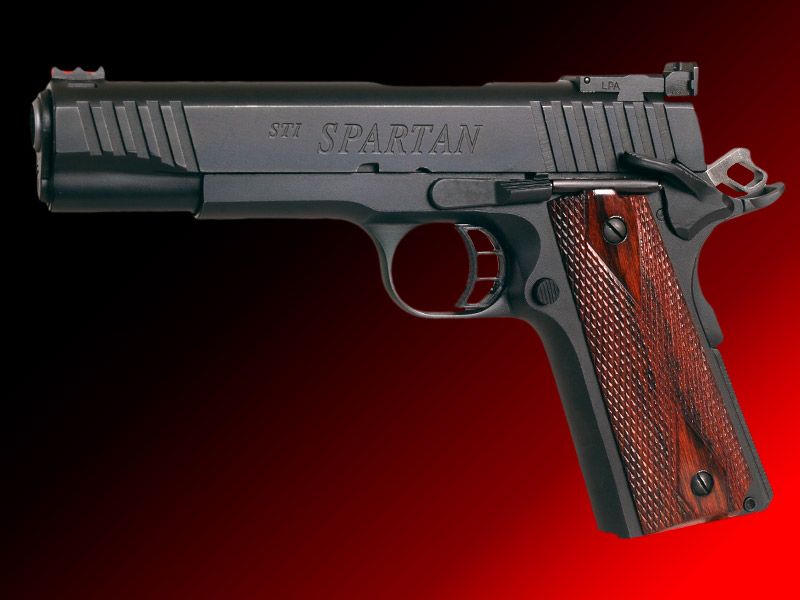 Of course it acts pretty modern on the shooting range too. Even though it is relatively compact, it handles beautifully even in rapid fire, mainly due to its mass. It fires 9mm rounds as if it was a small caliber weapon, giving it accuracy that is similar to full sized weapons. Spartan does not care how far the target is, it will hit it with equal ease. Whether you carry it every day or keep it on your nightstand for self-defense, STI Spartan III is an excellent weapon.

At any rate, STI offers something for everyone, and most for professionals.