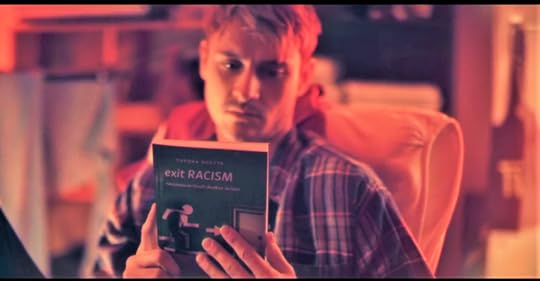 Season 1 of “All you Need” has been running for free in the ARD media library since May 7, 2021

As a guest on Deutschlandfunk Kultur, I spoke about my impressions:

Link: Talk to me, about 9 minutes

Link: short summary of the conversation (text not written by me)

Four gay roles - for straight people?
The casting of the ARD series “All you need” is disappointing

Oral sex in the club toilet: in episode 1, after a few minutes. “A scene”, complains the Berliner Tagesspiegel, with which the first major gay series on German TV “almost tripped itself”. Because gay men aren't always looking for quick sex or partying. Are more and more diverse and “not everyone likes to dance in Berghain”, warns critic Markus Ehrenberg. Oliver Kaever in “Spiegel” is also bothered by one of the first scenes of the first episode: the main character Vince receives a penis photo and pays back. “The scene described is less effective unique rather than striking; it reduces being gay to sexuality as much as a German comedy in 1995. "

Conversely, however, it is so important, overdue and liberating that fast sex, penis photos and a gay sauna are part of the world of the "All You Need" figures! And that sympathetic, complex, often charismatic men in an ARD series discuss who is active and who is passive today, during sex.

Many series become more complex and meaningful because the main characters are quite similar socially: four single women in “Sex & the City” (1998) wanted to show fundamentally different ways of asserting themselves as single. The British series “Queer as Folk” (1999) showed three queer men in Manchester, the US remake (2000 to 2005) showed four men in Pittsburgh. “All you Need” is particularly reminiscent of the HBO series “Looking” (2014) about somewhat haphazard, sloppy, often self-sabotaging queer men in San Francisco. A “dramedy” with a lot of dating, a little humor, hardly any melodrama.

The biggest narrative difference to such series (again yesterday internationally): "All you Need" has five very short episodes. In a total of barely 120 minutes, four characters don't have four stories: Vince is black, studies medicine and, in his late twenties, gets involved with a partner for longer for the first time, Robbie. Vince's roommate Levo had sex with family man Tom - and now wants to fill the empty space that Tom's ex-wife left in Tom's suburban house with a pool. Because only Vince and Levo know each other well, two-thirds of the short series consists of scenes in which characters ask each other bumpy acquaintance questions and “How's that with you?” Questions.

Especially in episode 1 it remains flat, didactic, joyless and intended for the straight audience: "Why do you send Dick picks?", "Why are so many still crazy about Britney (Spears)?" not open? Why don't you fight back? ”,“ What kind of life do 'we gays ”lead - and why should anyone have reservations about it?”, “What is so special about a gay sauna?”. This is not a narration - but a "Frequently Asked Questions" list, in which the author Benjamin Gutsche often only comes up with answers that five years ago were boring on the Internet collection of sayings: "Which of you is actually the woman?" - " When it comes to chopsticks, you don't ask who the knife is and who the fork. "

From episode 2 the plot looks less like a list that needs to be ticked off - and the four men are angular enough to ask themselves more deeply in a second season (already in progress): What do we have in common? Do we want to live monogamous? Who do we think we have to please? Two US series that asked such questions, "Eastsiders" and "A special life", broke off in 2019/2021. "All you Need" has potential - because many scenes tip into creepy places that men cannot find a common denominator. "I think so," says Vince, "as a gay man you spend your whole life trying to find out what is true about your identity ... and what is only appropriated because you don't want to attract attention in a heteronormative society."

Fortunately, it is unthinkable that in a series about four Scots no actor comes from Scotland. Conceivable, but fortunately more and more criticized: that in a series about four disabled or four trans characters no main roles go to trans people or people with disabilities. Openly queer actors were asked for “All You Need”, but in the casting of almost 400 applications, all four main roles went to straight people. That speaks for how many straight actors today hope for prestige and applause from playing gay roles: In 1995 an actor dropped out of “Verbotene Liebe” because he did not want to be committed to the role of gay Gero von Sterneck.

As much as I like to recommend “All you Need”, the bottom line is: A series without lesbians, bisexuals or asexuals, genderqueer figures etc. is less “queer” than exclusively and exclusively “gay”. And as interesting as an interview with the main character Vince would be about how being gay and being black shape his everyday life - Vince's actor Benito Bause can, as a straight person, contribute significantly less: With four queer actors there would now be four public speakers, contact persons, faces in a new, important visible position. Do we want to wait ten or twenty years - for the next series opportunity?

and, as a bonus: my notes, in preparation for the broadcast:

1) is this a "queer series" - or an everyday series in which 4 main characters are queer?

Unfortunately, the series isn't “queer” at all: it's about 4 gay men. the question of whether someone is perhaps bisexual does not arise. there are no lesbian characters, no trans characters, no asexuals etc.

if you basically say "queer" is a way of questioning norms, narrative patterns, the dominance culture etc. "All you Need" has a little "queer" look for me._I consider episode 1 to be a nuisance and a ... minor disaster because 4 men, most of whom don't know each other well, are having conversations. Often a straight friend also has a say. and because many characters are still new and strange to each other, they ask themselves questions. but EXACTLY the questions of which I think: that is what an ARD or Degeto editorial team thinks, are the questions of a hetero audience.

all in 33 minutes - I really wrote it down because I couldn't believe it:

Why are you sending dick picks?

Why do so many still look to Britney?

(Queerophobia) not upset you? Why don't you fight back

What kind of life do “we gays” lead - and why should anyone have reservations about it?

What is so special about a gay sauna?

and then a little later:

Don't you think there are purely platonic friendships even among gays?

2) But then episode 2 will be better?

Yes. All in all, the whole season is more like a film, 120 minutes - and despite the four characters it is told much more simply than, for example, “Sex & the City” (uff: simpler than THAT), I would really recommend simply starting with episode 2. I like that the main character is black and gay and that everyday racism and structural racism are discussed again and again. I like that it is * not * much about gay suffering and gay trauma - but that you can still feel when characters come close, for example when walking, always looks: are there people standing somewhere? Do you look angry? Can that escalate in a moment?

3) Aren't there already many such series internationally, e.g. on Netflix?

there is a lot of explicitly queer content - including more and more documentaries and contemporary paintings. but I like everyday series, also with bulky characters like in "Girls" - and there is surprisingly little OF THAT. "All you need" is similar in tone to "Looking", a San Francisco series about characters who ask themselves “Am I grown up now? How do I want to live? "Was filmed great, but a bit too boring for me. And then there is" Eastsiders "- that is talkative, often filmed a bit cheaply, etc., but for me it goes more deeply in human terms. and "Special - a special life" - the main character has a spasticity, has never had sex, everything is a bit simpler and more comedic, but has a lot of charm. "All you need" is definitely getting a second season, they have themes like addressing poverty / educational gaps, heteronormativity, I think it * really * urgently needs lesbian and / or genderqueer characters ... that's enough material, room for a series.

my “reproach” to “All You Need” would be that it has not yet been about anything deeper or central: In this series world, being gay means that you are a man and meet men with whom you have little in common. and any of these men can sleep with you, or with everyone else around you - narrative so far, it feels like a ball is thrown from figure to figure.

4) On Youtube there is a long conversation with the writer and director of the series, Benjamin Gutsche. the drag queen Bambi Mercury asks disappointed: why are all four leading roles played by straight actors?

yes - I enjoyed watching the conversation very much and with great benefit. the answer is that they also asked some queer actors for the casting - but that was THE priority neither for the editor, nor for the caster nor for Benjamin Gutsche. in fact, many gay actors have plunged off - while it is apparently attractive and exciting for straight people to play gay roles in 2020.

(When Ruby Rose, queer leading actress on "Batwoman", left the series after season 1, a replacement was sought for her. The casting call ended with "Performers who are LGBTQ are encouraged to submit." queer character Ryan Wilder, Batwoman's successor in season 2, a queer actress.)

I'm glad Gutsche is gay. Unfortunately, I also find it unavoidable that when you hear such questions, 20 people always shout “Yes, but can only murderers represent murderers?”

But that's not really my problem: Lars Steinhöfel plays a gay character in “Unter Uns”, Easy - and Steinhöfel, as a gay man, simply gives MUCH more political, thoughtful, interesting answers when you ask him. just like Gunnar Solka from “Lindenstrasse”. Most of the candidates on the reality show “Prince Charming” had Instagram - and I think it is important when a series world grows to be able to read interviews, to be able to read worlds BEHIND these characters.

if that were 4 queer actors, there would now simply be 4 more important or present queer voices. I can ask lead actor Benito Bause “You are black.” But I just can't, like with his character, ask: “You are black AND gay - how do they work together?” that is a missed opportunity.