An aspect in which two planets stand side by side. Depending on which planet it is, an orb of up to ten degrees can apply.[2] If a conjunction extends beyond the sign boundary, a certain dichotomy / ambivalence in the flow of energy must be taken into account.

The conjunction is the strongest aspect. How it actually works depends on the energies of the planets involved. First of all, a conjunction means a connection and mutual penetration of the two forces. The planets affected are constantly influencing one another. In the case of planets with a similar energy - for example the moon / Venus or the sun / Mars - this increases the respective potential. You will feel that you are in good hands with one another and will be able to assert yourself better against others when united. If, on the other hand, very different planets - for example Mercury / Saturn, Mars / Saturn or Mars / Neptune - are closely related, they can limit each other's effectiveness. Which of the two gets the upper hand depends on the environment, that is, on the zodiac sign and the house in which the conjunction is arranged, as well as on the other aspects to other planets. A Mars-Neptune conjunction in a watermark can mean, for example, that the horoscope owner has difficulties with self-confidence, i.e. cannot appear decisively and assert himself. In return, he may achieve his goals in a more subtle, indirect, and less obvious way that his environment may underestimate. The same conjunction in a fire sign, on the other hand, means that the sensitive side of the person is probably not so easily felt, given the power and dynamism that a fire Mars displays. 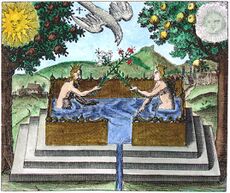 King (sun) and queen (moon) in the shared bathroom[4]