What is fueled by haters

The Center for the Observation of Racist and Xenophobic Behavior speaks of an "intimidation interrogation" that went beyond normal law enforcement activities: Several students from the Silesian University in Katowice were summoned to interrogation without giving any reason had been questioned for hours by officials and a lawyer from the Ordo Iuris organization about a complaint against a professor. After that, they were shocked and female students cried, according to the center.

The sociology professor, who qualified as a professor at the Catholic University of Lublin, is said to have said, among other things, during a university lecture that a "normal family" consists of men and women, that abortion is "murder" and that contraception is "unsocial". She also spoke of "gender ideology", which is dangerous like communism, and presented alleged study results that children in rainbow families are not doing well.

After several students officially complained in January, the university started a disciplinary investigation - the spokesman for the committee then recommended a reprimand, because the professor had spread her own "derogatory" worldviews and, among other things, had made homophobic and discriminatory statements on religious grounds . The professor finally resigned in public protest before her hearing and a decision could be made. After reaching retirement age, she had only worked as an assistant professor anyway.

The police reject allegations, the university criticizes the procedure

As the police announced in the meantime to the local media, the regional public prosecutor's office is investigating a criminal complaint from a person. The accusation is based on false information from students and ultimately the criminal offense of "falsifying evidence". The students were questioned as witnesses. Reports from the anti-racism center in social networks were exaggerated and wrong and the interrogation was correct, said a police spokeswoman. The students were informed in detail about the allegations and their rights. A lawyer from Ordo Iuris represents a person who may have been harmed in the context of the allegation and therefore has the right to participate in the interrogations. According to naszemiasto.pl, two more interrogations are planned on May 27 and June 2.

The management of the Silesian University issued a statement on Monday that expressed "deeply concerned" about the interrogations. There is no reason to question the reliability and independence of the disciplinary body. To investigate criminally while the body has not even completed its work, attacks the autonomy of the university, freedom of expression and fundamental rights. There was no direct way to get involved in the process, but it would be closely monitored and members of the university would be offered any form of support, including legal support.

Ordo Iuris is increasingly influencing politics and the judiciary

According to media reports, Ordo Iuris had accompanied the professor from the beginning. The sociologist will be punished for refusing to "teach gender ideology," commented the ultra-Catholic organization in January, which saw "censorship" at work in contradiction to academic freedom and aversion to Christianity.

Ordo Iuris is close to the "Brazilian Society for the Defense of Tradition, Family and Private Property" (TFP), which is organized in Germany by Mathias von Gersdorff ("Children in Danger") and in the EU by Paul von Oldenburg (cousin of the AfD politician Beatrix von Storch) is represented. The Polish organization is part of the international Christian fundamentalist network "Agenda Europe", whose members act individually and in a coordinated manner against LGBTI rights (queer.de reported). She is expanding her influence in Poland more and more clearly and confidently. Similar to the US organization "Alliance Defending Freedom", Ordo Iuris relies on legal advice with the creation of precedents, lobbying and legislative initiatives that are also effective in the media. A legislative initiative to ban sex education, a planned further restriction of abortion and the creation of so-called LGBT-free zones in almost 100 cities and towns has been directly involved in the last few months.

In the sometimes different resolutions, the cities commit themselves, for example, not to accept "homo propaganda", not to carry out sex education in schools and to oppose the "ideology of the LGBT movement" - Christian values ​​- to "protect the family" and children oppose. LGBTI activists see this as a direct attack on queer people, not on an alleged ideology, especially since last summer a magazine distributed stickers with a crossed rainbow and the imprint "LGBT-free zone" (queer.de reported).

Some municipalities had decided on a resolution prepared by Ordo Iuris and other hate groups, including the CitizenGo organization, which is also active in Germany, which would result in similar goals without mentioning LGBTI people as a "Charter of Family Rights" - this results from the context of the social debate, from the work of Ordo Iuris or from the demands, for example if, based on a purely heterosexual definition of marriage and family, the funding of projects that could "harm these values" should be rejected.

At a press conference in March Ordo Iuris complained about the worldwide critical reporting on "LGBT-free zones" and an alleged misrepresentation of its own noble goals. The organization announced that it would take several LGBTI activists to court on behalf of several affected communities who had been offered legal support - including Bartosz Staszewski, who photographed queer people in front of place-name signs that read "LGBT-free zone" (queer.de reported).

The activists Kuba Gawron and Mirka Makuchowska, who published a map of the areas with corresponding resolutions under the heading "Atlas of Hate", will also be prosecuted for "defamation". Last week, the first lawsuit against Gawron was filed - the Przysuski County is demanding the deletion of his entry, the assumption of legal costs, a fine of around 4,400 euros to a family organization and two public apologies at press conferences at the Polish press agency and in the European Parliament, where the activists presented their project. 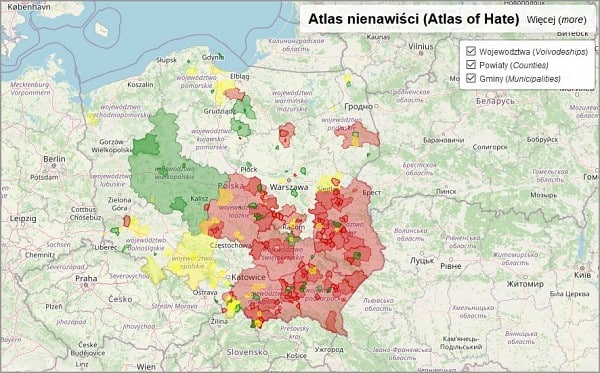 The interactive website "Atlas of Hate" lists the regions that have passed resolutions against, for example, an "LGBT ideology"

What makes Ordo Iuris so dangerous is political support. Jaroslaw Gowin, the deputy prime minister and education minister, said on Twitter in January about the case of the homophobic university professor (widely circulated in the state media) that "censorship" would not be allowed in "extremely ideological environments". He announced an amendment to the law on higher education, according to which freedom of expression and research should apply there and this should be monitored by rectors and violations should be investigated by a national committee with the participation of the minister. The oko.press portal then found that Ordo Iuris had previously published an almost identical draft law on its website.

A word on our own behalf
A lot of time and hard work go into good journalism - but an online portal like queer.de cannot be financed from advertising income alone. With a donation, e.g. via PayPal or bank transfer, you can secure and strengthen our important work for the LGBTI community. We offer subscribers an ad-free offer. Support queer.de now!