Over the edge of what happened to Nutso 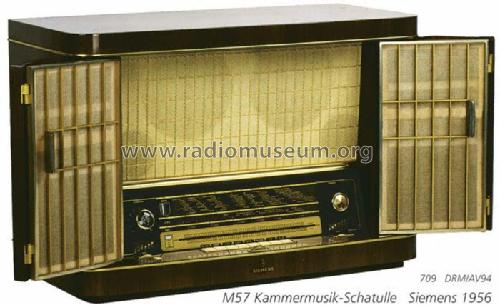 The end of the caskets

In the years 1954 - 1955, Siemens resumed its pre-war tradition of "caskets" with the H42 and P48 devices.
The chamber music box M57, however, was the last of its kind. The reason for this is probably to be found in a better "marketing gag" of the competition - and it was called: 3D sound. For this purpose, the tweeters have now been built into the side walls of the radios. Siemens then had some argumentation problems to advertise the grilles of the chamber music boxes as equivalent sound dispersers to the customers.

The strategy has already been changed with the H52 and with the H53, which is identical in terms of circuitry, "jumped on the new band". 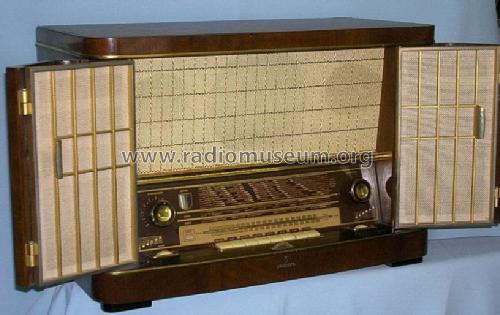 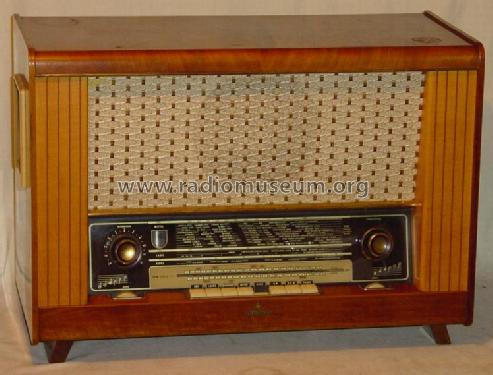 On the left the H52 can be seen in the form of a box and on the right the circuit-wise identical H53 with 3D sound side speakers. The devices H64 and M66 are not caskets either, but have side speakers.

First of all, the "conventional" amplitude limiter will be presented.

Fig. 6-11 [1] shows a conventional amplitude limiter stage for the FM IF. The circuit is basically very similar to an Audion - with the difference that there is an oscillating circuit in the anode. The RC grid combination could just as well be directly on the grid. 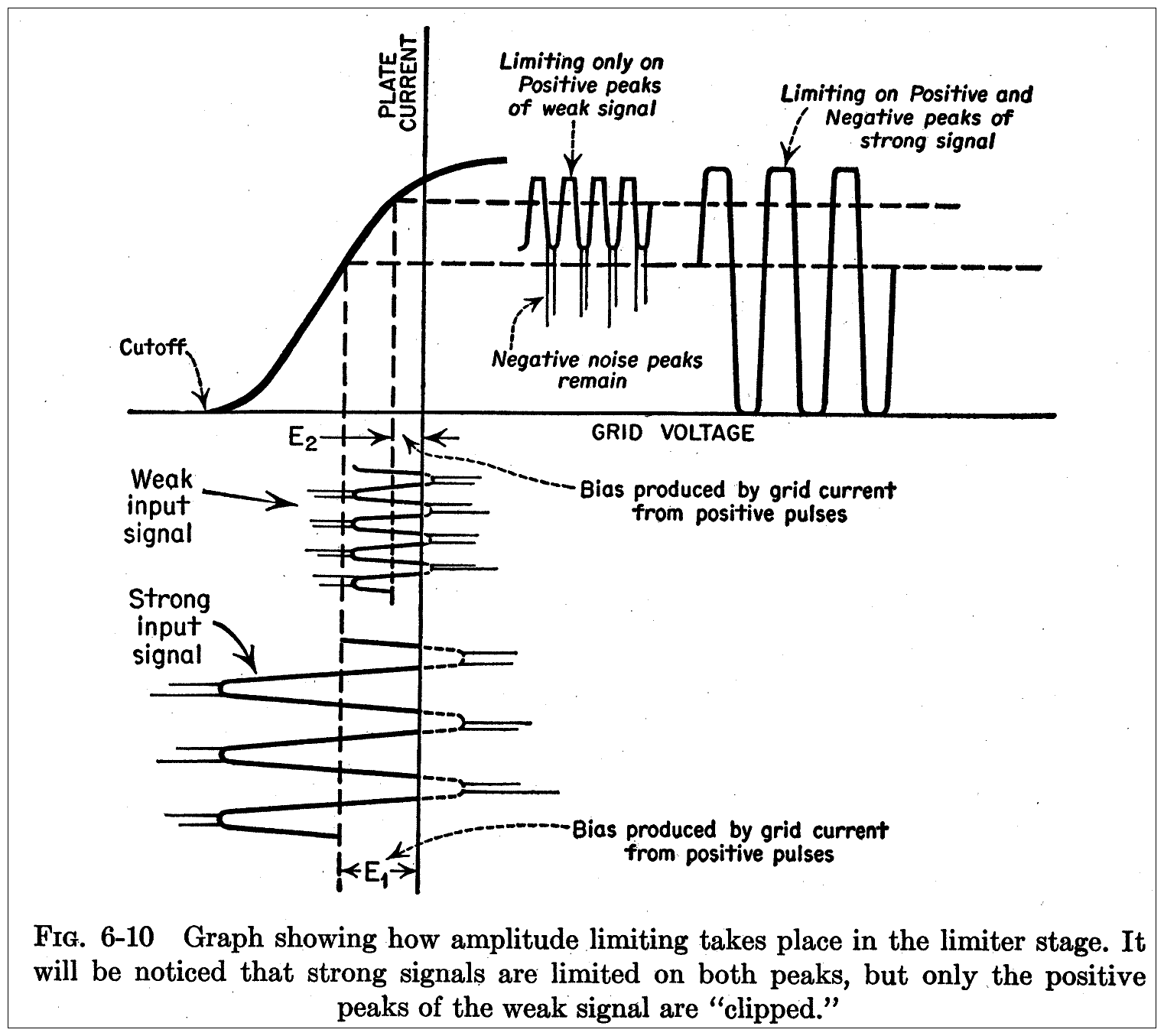 Fig. 6-10 [1] illustrates the functioning of the amplitude limitation. Interfering pulses are superimposed on the FM signal.

At the same time, you can also see here which problems arise if the HF oscillation to be limited does not have the amplitude that is suitable for the characteristic curve of the (limiter) tube. If the amplitudes are too small, the result is a one-sided and therefore incomplete limitation.

In memory of:
Frequency discriminators, which are intended to convert frequency changes into amplitude signals, provide output signals that are not independent of the amplitude of the RF signal. In this way, (undesired) amplitude fluctuations in the FM signal then appear as interference in the demodulated output signal.

A cascade of 2 limiter stages behaves a little better. Here the 2nd stage then limits what the 1st stage could not limit, Fig. 6-12. [1] This also applies to the "negative noise peaks"in Fig. 6-10, which are then cut off in the 2nd limiter stage.

The question of what happens there must be completely in the Time range be considered because the amplitude limitation is a non-linear process acts.
[This has nothing to do with the frequency range or the AM sidebands.]

So, the peaks or the amplitude modulation (for a weak signal) are only cut away on one side, Figs. 6-10. This results in an (additional) Equal size. Before that, it was just a change in size. Otherwise the voltage would not have been transmitted through the input bandpass filter.

However, this constant value cannot be transmitted via the next band filter.
If, however, the constant value behind the band filter is missing, there must inevitably be a fluctuation in the amplitude again on the previously "smoothly shaved" side of the IF oscillation. For this reason, the polarity of the secondary coil of the band filter does not matter. In principle, you have an amplitude modulation again, but only with half of the original "degree of modulation".

Due to the amplification of the first IF stage, the signal has now become larger overall, so that it is "shaved off" at the top and bottom in the 2nd limiter stage.

Of course, this will not apply to tiny IF signals. But they have to struggle with the noise anyway. I assume that with a correctly dimensioned two-stage limiter, all signals that do not "disappear in the noise" are then "properly" limited on both sides. 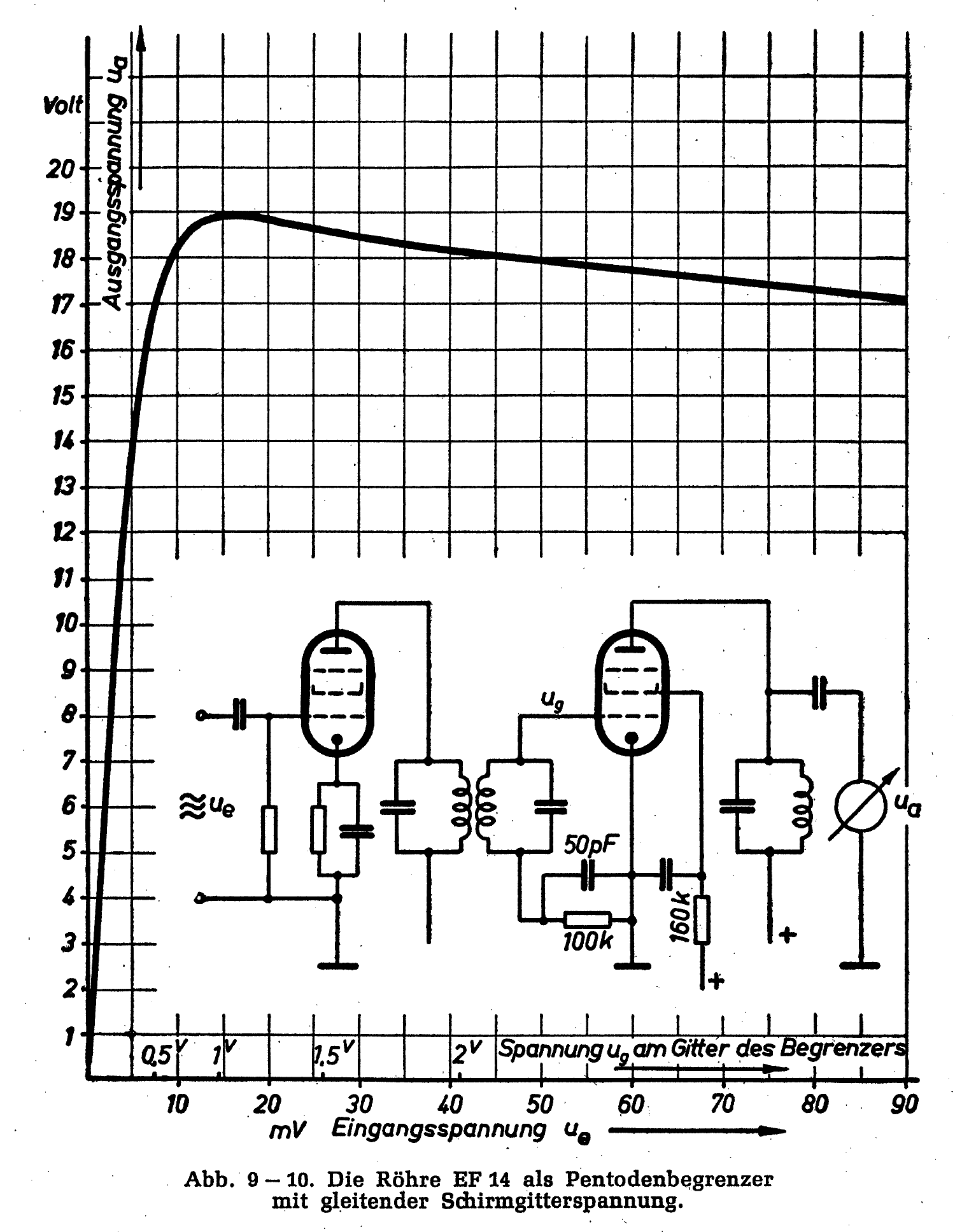 Even if two such limiter stages work better than one, one always obtains a falling characteristic curve for the limitation as shown in Fig. 9-10 [2].

The limiter characteristic shows a "gradient" in the direction of higher input voltages. This is undesirable because in this way, despite the "ideal" amplitude limitation in the demodulated signal, there is a dependency on the amplitude of the FM IF signal.

An explanation for the course of the conventional limiter stage is given in [3] and it is shown how the problem can be eliminated with the aid of a level control. 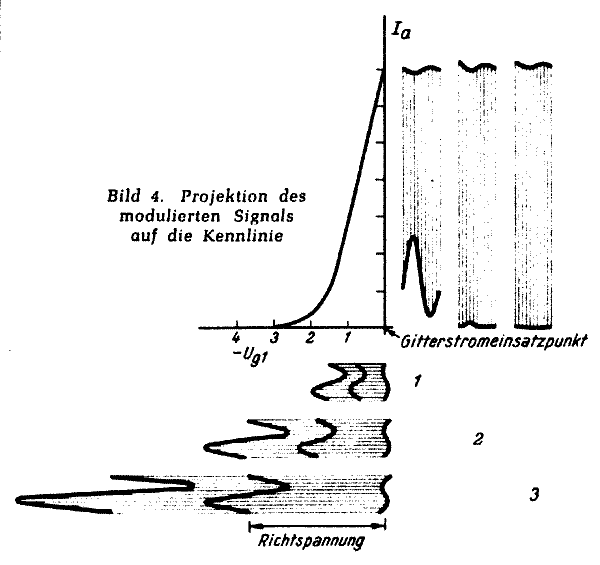 Picture 4 [3] shows, similar to the above picture Fig. 6-10, the incomplete limitation for the case that the amplitude of the FM oscillation is insufficient. ["Bias" in Fig. 6-10 is referred to here as "straightening voltage".]

In Figure 4, the high-frequency vibrations are only indicated. The interfering AM modulation superimposed on the IF oscillation, on the other hand, is shown thickly. [In contrast to the interference pulses in Fig. 6-10.] 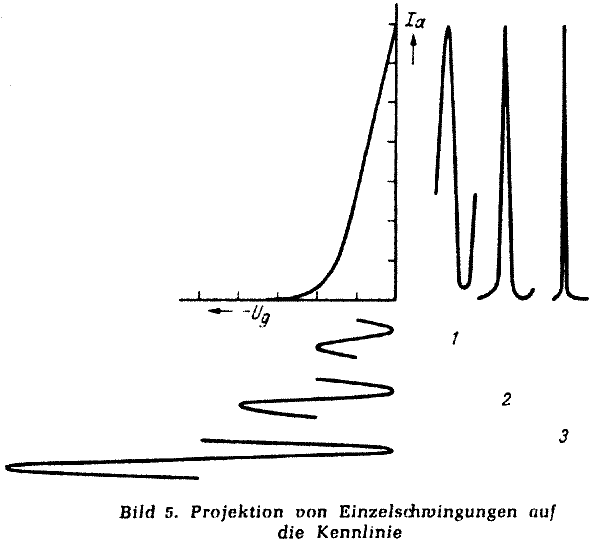 Figure 5 [3] now shows - in contrast to Figure 4 - the effect of a fixed limiter characteristic on the individual high-frequency IF oscillation.

It can now be clearly seen that with an increase in the amplitude of the IF voltage, the current pulses of the anode current I.a the limiter tube become more and more "thinner" or slimmer.

However, since there is now an oscillating circuit in the anode circuit of the limiter tube, which is tuned to the IF frequency, only the "basic oscillation" contained in the current "needles" is screened out by this. The more pointed the "needles", the more harmonics and the less fundamental they contain - according to a Fourier decomposition. Consequently, the amplitude of the fundamental oscillation becomes smaller, the "thinner" the "needles" of the anode current become. This is the reason for the "falling" characteristic of a conventional amplitude limiter. 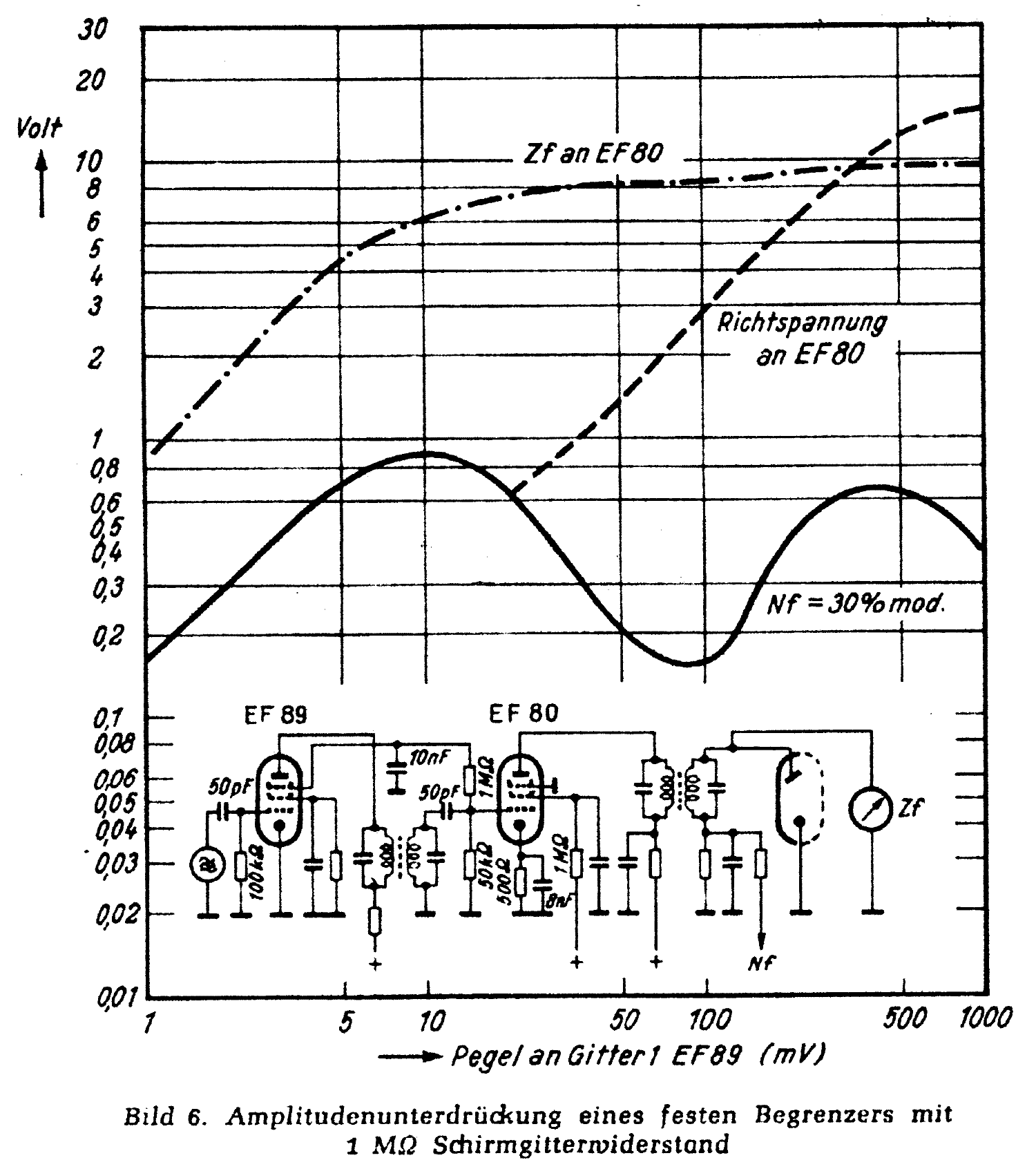 Figure 6 [3] shows the suppression of amplitude modulation for a limiter with a fixed limiter characteristic.

Compared to Figures 6-12. There is already an improvement here in that the directional voltage of the 1st limiter stage that occurs at the control grid of the EF80 is fed back with the EF89 as the control voltage for grid 3.

The resulting LF voltage for 30% interference modulation is unsatisfactory, especially for higher input levels of the IF voltage, as a comparison with the level-controlled limiter shows, see Figure 7 (below). 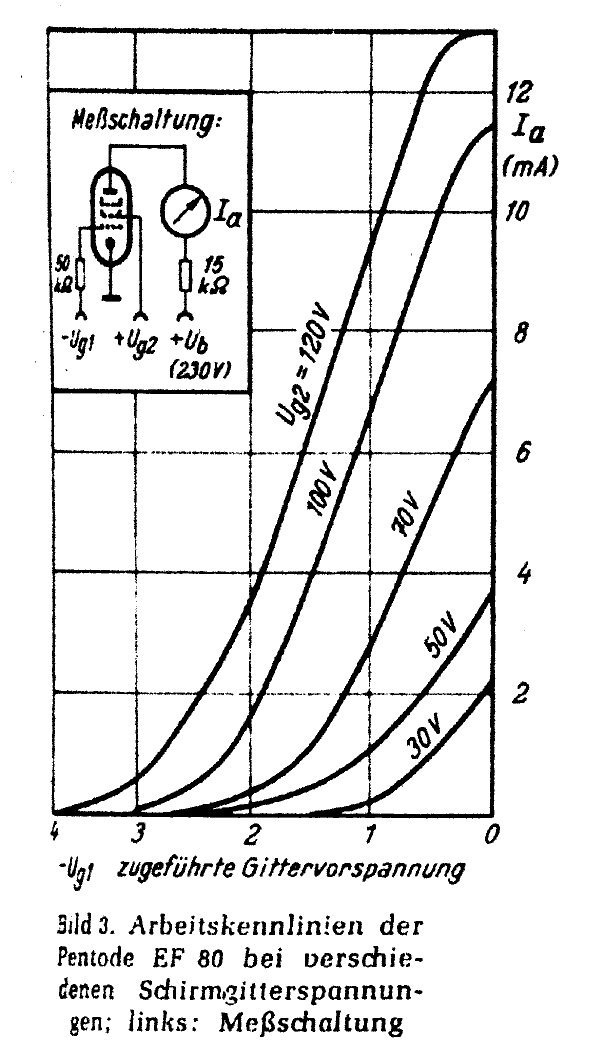 By varying the screen grid voltage of the EF80, the limiter characteristics can be adapted to the size of the amplitude of the IF signal, Figure 3. [3]

A control loop is thus sought that can accomplish this. 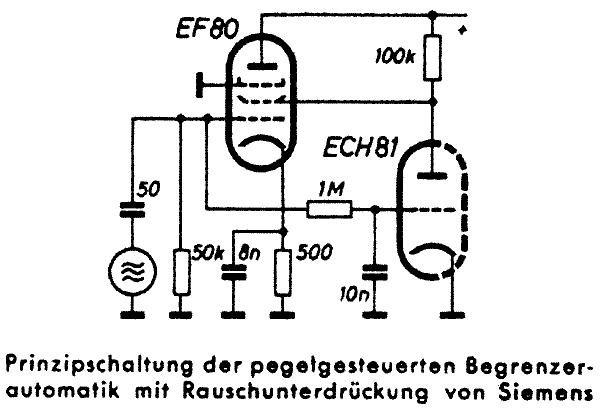 The basic circuit [4] shows how this control circuit works. As the amplitude of the IF voltage increases, there is an increasing negative bias voltage (through grid rectification). This is applied to the grid of the triode of the ECH81 (otherwise not required in FM operation) and causes a reduction in the anode current of the triode. This increases the anode voltage of the triode and thus the screen grid voltage of the EF80. This gives you the level-controlled limiter characteristics of the EF80.

Figure 8 [3] is the somewhat more detailed circuit of the level-controlled limiter stage.

The grid and anode of the EC (H) 81 are switched between AM operation and FM operation of the radio.

No tube system is unused with FM reception. 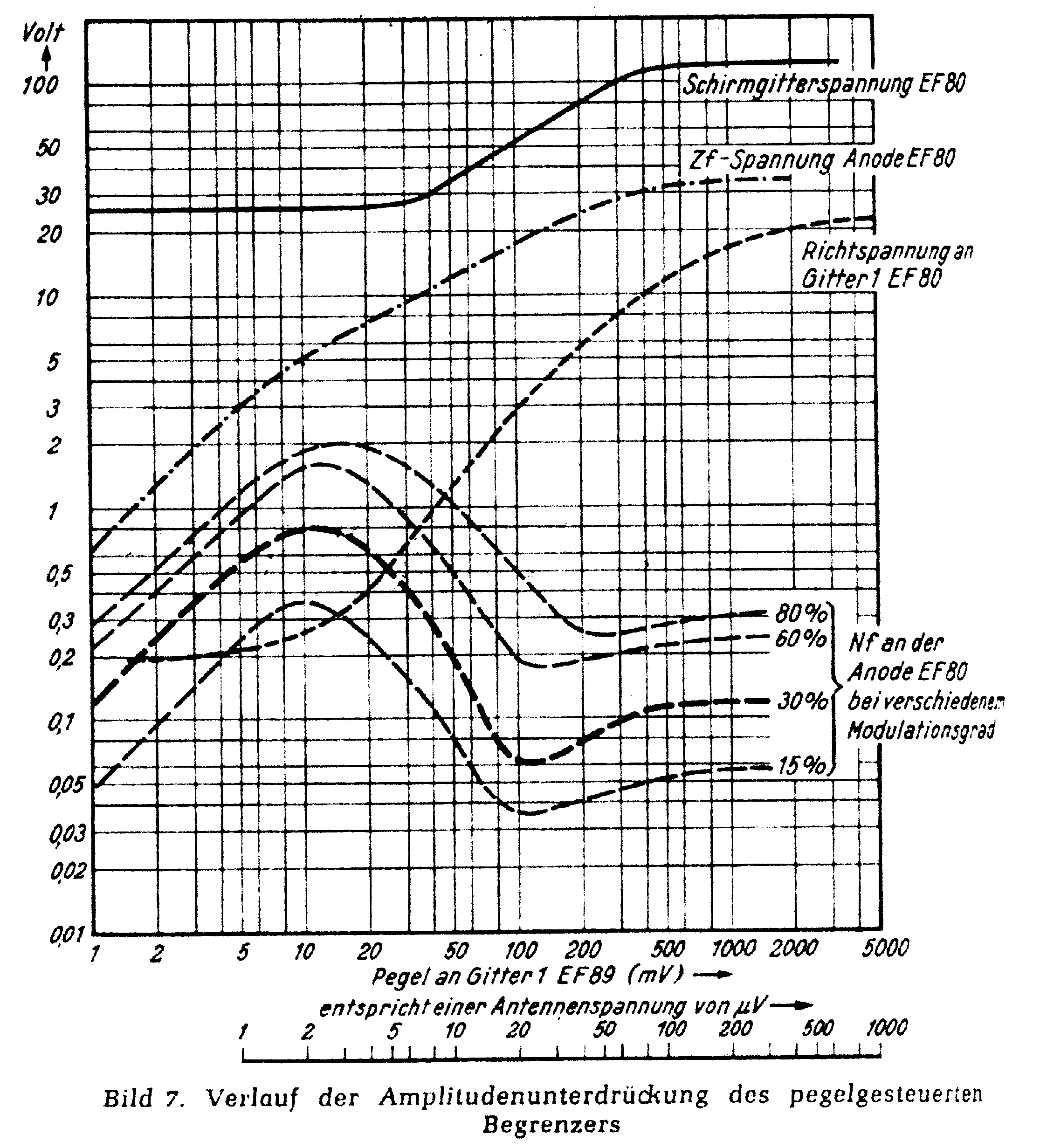 In Figure 7 [3], the curve of the screen grid voltage of the EF80 as a function of the level at grid 1 can be seen as the top curve.

In comparison to Figure 6 (above), it can be seen here that the level-regulated screen grid voltage of the EF80 and the resulting variation in the limiter characteristic now significantly reduces the disruptive AM reduction for higher IF levels. 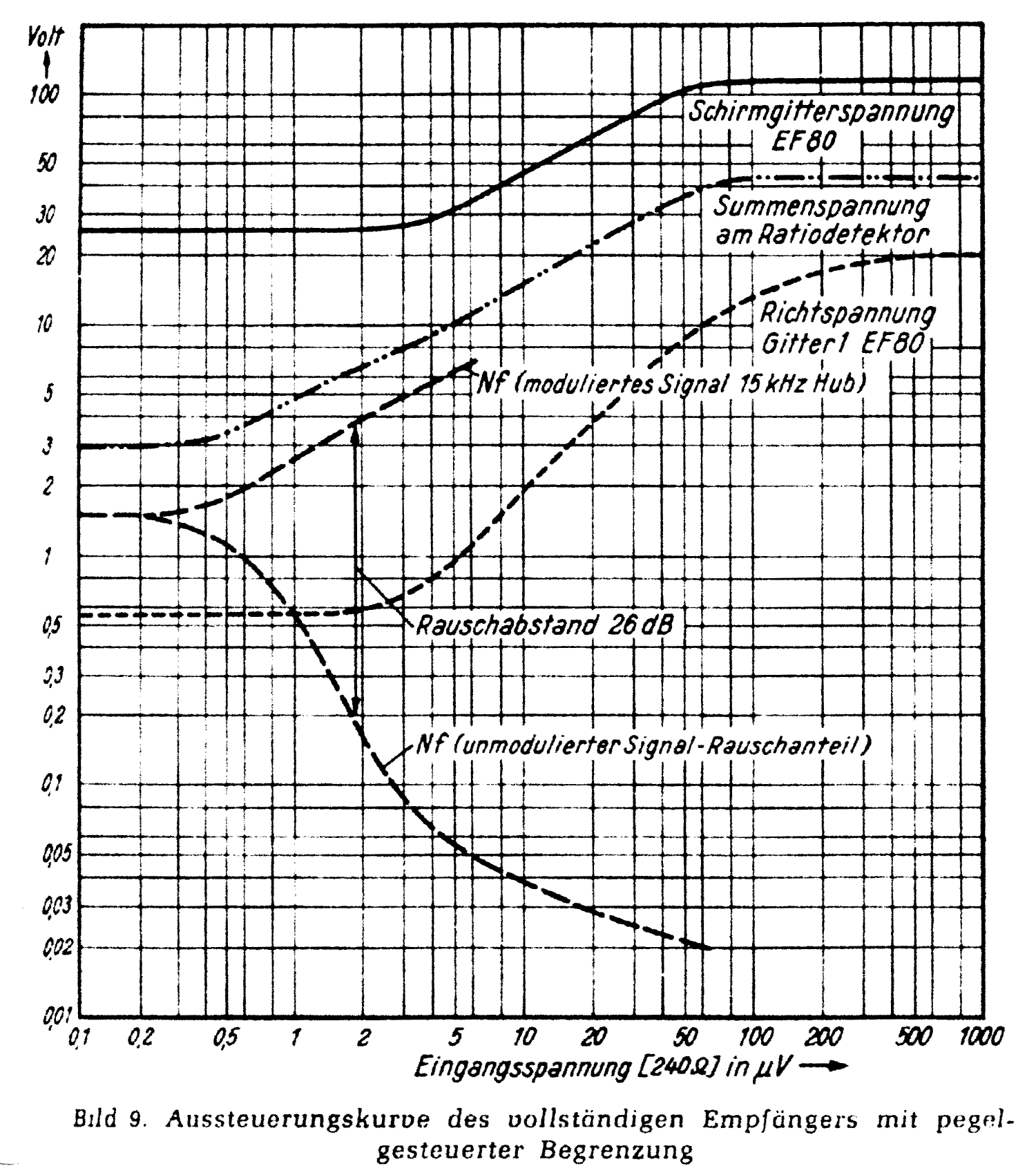 The modulation curve of the receiver shows that a signal-to-noise ratio of 26 dB is already achieved with an input signal of 2 μV, Figure 9. [3] 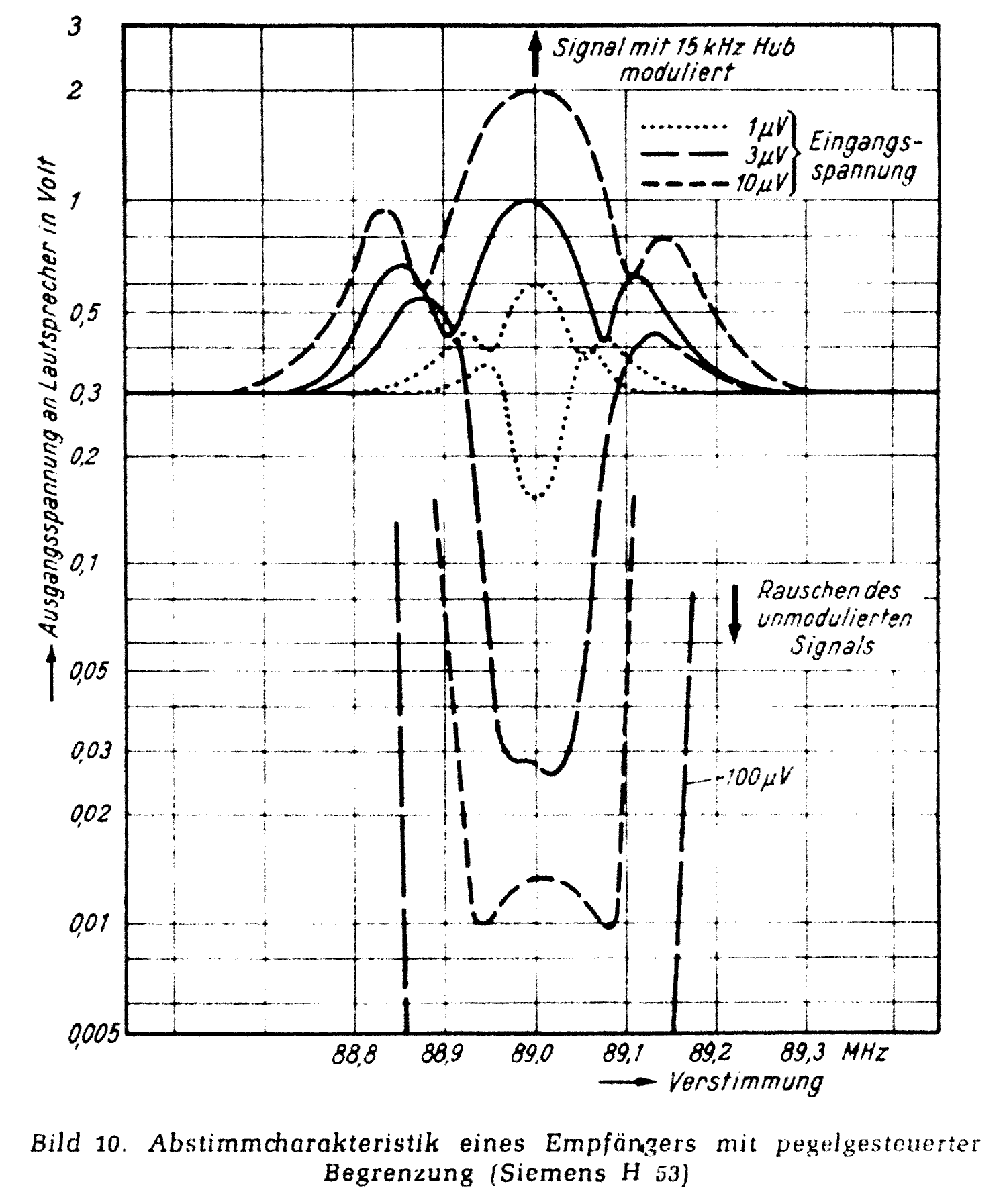 Figure 10 [3] shows the tuning characteristics, measured for the H53.

Because the limiter threshold is very low when the input voltage of the receiver is very low, this also reduces the noise between the transmitters accordingly.

In the circuit of the SH chamber music box M57, the control lines for the level-controlled limiter stage (EF80) are marked in color. The additional control of the brake grille of the EF89 already shown in Fig. 6 or Fig. 7 (above) is not specially marked. 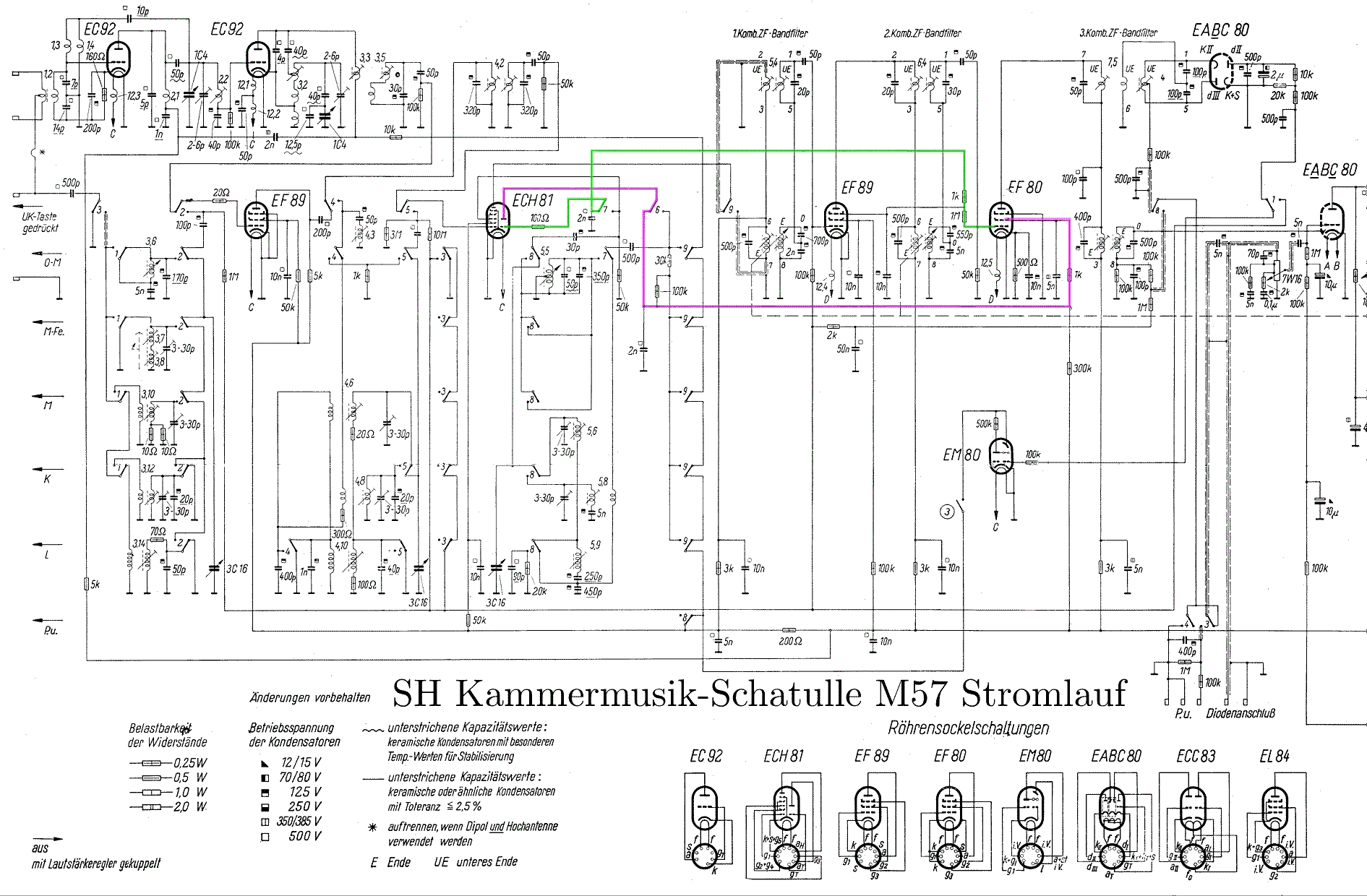 My thanks go to Hans Knoll, who provided essential information on this topic.